MOUNTAIN VIEW, CA- The name “Paramore” is pretty much synonymous with the corresponding years that took place between 2007 and 2010. The present day “genre-neutral” trio broke out onto the scene nearly fourteen years ago as a five-piece group during a time where subcultures such as emo and scene teenagers thrived in numbers. Following the signing to their first record label, Fueled By Ramen, the troupe skyrocketed up the mainstream charts with their sophomore release entitled RIOT!, an album that spawned quite possibly their most recognized and beloved hit throughout all of their catalog, “Misery Business.”

A lot has transpired since that time, including a transition of a signature sound that left several loyal followers disheartened and a very publicized controversial split amongst long-time band members. But one thing is for certain, Paramore has always been at the forefront of the music scene, which has allowed them to test the waters with a chart-friendly sound with their fourth self-titled release and then fully-developed fifth studio album. In turn, it has allowed the band to show some vulnerability in their creative process with their devoted fanbase. This is precisely what The After Laughter Summer Tour (also known as Tour 5, in sequence of their touring cycle supporting their most recent release, After Laughter) is all about. The band stated following the announcement of the tour, this would be the final trek in support of the era, before taking a break and heading home to Nashville.

Paramore made their final stops of the tour with incredibly high energy shows at Shoreline Amphitheatre in Mountain View, California and Red Rocks Amphitheatre in Morrison, Colorado. The trio brought along fellow bands Jay Som and Foster The People to open various dates of the tour. Paramore dove into their 21-song setlist with “Grudges,” a track off their latest release that signifies the repairing of the relationship between front woman Hayley Williams and drummer Zac Farro. One thing that becomes abundantly transparent when you’re at a Paramore show, is that the setlist is intentionally crafted to reflect the emotional and physical state of the group at that point in time. After Laughter is, for all intents and purposes, a melancholy masterpiece disguised in harmonious synths and 80’s-influenced beats. However, is it also a heavy signification of progression and willingness to embrace those somber moments. It’s important to note that After Laughter is the first record to display Paramore’s complete vulnerability as a unit, which also makes it the band’s most mature release to date. Over the course of both nights, the band shared brief, but candid interactions between numbers with each crowd. One moment that seemed to particularly resonate with those in attendance for the Mountain View show, was a memory Williams shared during the writing process of their third album during the acoustic portion of their set.

“We were just wrapping up the touring cycle for RIOT!, and had just begun writing for Brand New Eyes.  Honestly, it was such a weird time. We were just a bunch of kids that suddenly the world knew, and we didn’t know what to do with it. So, we wrote a bunch of songs about it. The song we’re about to play for you could possibly be my favorite off the record, but really, I just love how it keeps evolving and growing with us,” Williams stated before proceeding into easily the most well-received number of the night, “Misguided Ghosts.”

It’s undeniably remarkable to see a group that has stood the test of time throughout the past decade completely in their element for the first time in years. Williams’ signature live vocals were consistently on-par the entire night, paired with her powerful vibrato that was notably present during 2009 hit “Ignorance,” in which she utilized a megaphone for a greater part of the performance. Highlight performances that showcased the more carefree side and true unity amongst Williams and fellow band mates Taylor York and Zac Farro included “Caught In the Middle,” “Rose Colored Boy,” and a cover of “All That Love Is” from the Farro-fronted side project HalfNoise, which received an overwhelmingly positive response from attendees. Allowing the roles to be reversed for a few performances signified equal importance amongst band members, a subject of discussion for many years and a factor that led to their partial split earlier on.

Paramore’s development as a whole (and partly due to their transition into mainstream) has allowed people across all generations to attend their shows with a feeling of inclusivity, and they’re coherently aware of it. One of the most successful music groups that was once exclusively targeted towards a demographic that embraced angst and rebellion has now opened its arms to anyone and everyone who’s willing to join them along their journey. “It’s important before we go anywhere, that not only do we say thank you to everyone for coming here and supporting live music. But specifically, every single one of these shows every night has looked incredibly diverse,” Williams concluded before closing out their Bay Area set with After Laughter‘s opening track, “Hard Times.”

The trio wrapped the tour officially at the iconic Red Rocks Amphitheater in Morrison, Colorado. “This was our favorite tour that we’ve ever done, it was the best time that we’ve ever had. It feels so good to be able to say this at the end of a long run. It’s such a privilege and honor to play music for all of you. Colorado, until next time… we love you, we love you, and we are Paramore!” Williams said visibly emotional on the closure of the tour to a packed house.

Considering the complicated history that Williams and her crew have overcome, these performances have only demonstrated the newly found collectiveness and creative direction that, for quite possibly the first time in several years, showcases a genuine state of content.

Paramore’s most recent release, After Laughter, is available now. 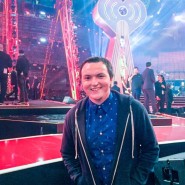 BC Premier: Music Video For Paper Jacket’s Acoustic Rendition Of “Trigger” Come Out To Madame Siam In Hollywood Tomorrow Night (4/27) To See Them Live!