Magic is Back Under the Stars At The Hollywood Bowl Review: Harry Potter and the Half Blood Prince In Concert

HOLLYWOOD, CA- On September 17, 2021, the Hollywood Bowl welcomed muggles, witches, and wizards from across the land for the viewing of Harry Potter and The Half-Blood Prince, the sixth movie in the Harry Potter Franchise.

The one thing that makes the Harry Potter movies so spectacular at the Hollywood Bowl, besides the wonderful orchestra that accompanies the movies and brings the score to life is the people watching. I got there a little early to enjoy some snacks before the show. Many people had brought their fandom to life not only in their outfits but also in their charcuterie and table settings; from spider bowl, green goblets, and golden snitch chocolates the fans were celebrating with Harry Potter-inspired delectable delights.

Besides the food, people showed their Potter pride with house colors, tee shirts, wands, scarves, robes, and vintage-inspired outfits. I wore one of the hand-knitted sweaters I made in Slytherin colors and a 1950s style felt skirt with Slytherin House crest and motto. Guests were fully into the Harry Potter spirit as when I entered the venue, a couple waiting in line motioned for me to ahead of them with a polite, “Oh, I am so sorry after you.” They were Slytherins themselves. That little gesture represented an acknowledgment of something special … oh, yes we are the same. Yes, fellow Slytherins … cunning and ambitious people who will sign up for a contest, work overtime, and balance a hundred activities on their calendar. If you were ever in a group project they were the ones that would do everything. As a Slytherin, we get a bad rap sometimes as we aren’t always the warm and fuzzy type, but those we do consider friends we will have your back until the end. You can learn a lot from a person by knowing what Hogwarts House they belong to. Ravenclaw is wise and witty, always trying to learn something or pick up a new hobby, and will probably fill you in on random facts they know. The brave Gryffindors will be the spontaneous type and will always be up for a last-minute trip to Vegas. And if you ever have a bad day, a Hufflepuff will bring over cookies while you sob your tales of woe as they are always loyal and kind. So next time really you really want to figure someone’s personality, ask “What’s your Hogwarts House?”

Witches and Wizards and a few muggles waited eagerly for the show to commence. The conductor Justin Freer took to the stage and welcomed all to the Harry Potter in Concert series traveling around the country. After an 18 month hiatus, this performance at the Hollywood Bowl was their first.

The audience was entranced from the start of the opening credits, and throughout the event, the applause and boos from the crowd really proved how immersive this concert experience was. Sure, you can watch this from your home on the streaming platform of your choice … or DVD… but to experience the movie with live orchestration and a fully committed audience is a once in a lifetime experience that makes “going to the movies” a thousand times better than one can possibly imagine.

Harry Potter and the Half-Blood Prince is one of the darker of the Harry Potter films. In their 16 years at Hogwarts, Harry, Hermione, and Ron have experienced a lot of triumphs, but also a plethora of tragedies. This film finds Harry and company in a totally different emotional state from that when they were fresh-faced, naive children that were excited to be sorted. Voldemort has returned and the Death Eaters are back. Chaos and darkness loom. This one of this film is much different than the earlier years of whimsy and enchantment, and the score reflects that thematic change. The music cuts deep and broods a bit more. The violins bring shivers down your spine, and the cellos allude to the darker forces to come.

A huge portion of the movie’s theme revolves around loss: loss of life, loss of confidence, loss of love, and loss of one’s humanity. We slowly learn more about the Dark Lord as a young Tom Riddle, witnessing the memories of him locked in jars trying to uncover the missing puzzle to figure how to defeat him. He who has caused so much pain and death. The opening of the movies alludes to the recent death of Sirius Black, Harry’s godfather, and one of the few people who Harry considered family. One of my favorite scenes was that unbreakable vow that is made between Severus Snape and Narcissa Malfoy. The score perfectly creates an intense mood of sorrow and fear as a mother of 16, giving up her son to do the bidding of the Dark Lord. For him to fail would mean his death. The score slowly builds with violins casting a spell of sorrow with a slight glimmer of hope. While a huge part of the movie does portray the loss of life, confidence, and love, there is an underlying promise of hope for better days.

Nothing can be more evidence of the continued theme of loss as with the pursuit of love for the young witches and wizards. Being an adolescent in love, roaming the halls of Hogwarts, can’t be easy, and it’s probable more difficult when that love is not returned. Probably one of the most heartbreaking scenes was that of Hermoine crying after Ron set his sight on someone else. The orchestra, with its strings and wind instruments, created a melody of sorrow really giving life to Hermoine’s tears.

While there were many sorrowful moments, there were also some joyful moments reflected in the score. From the bombastic beats during scenes of George and Fred’s Weasleys’ Wizard Weezer joke shop, to the strange interaction Harry has with the eclectic Luna Lovegood as her spirit is embodied with a whimsical tune, to that moment of exuberant jubilation when Ron wins his quidditch match, those scenes were scored in a way that really gave the film some fantastic moments of levity and celebration.

As the movie continues we learn more of Tom Riddle and the intrigued relationship he has with a serious and dangerous magic Horcrux. A very diabolic creation is able to kill and split one’s soul. In Harry Potter, the loss of part of one’s soul is the ultimate loss of one’s humanity. This character introduction is in contrast to the struggle that Draco grapples with. Faced with a terrible plan of what he must ultimately do, the idea of taking life slowly eats away at him. The tense score during the scenes where Draco is having this internal struggle really emphasized the questions of whether he can truly carry out the ultimate plan of murder? Is he truly that heartless and callous?

Another scene that was accentuated by the orchestral performance was the final scene where Harry, Hermione, and Ron are looking out of the tower over Hogwarts as the sun is setting. Dumbledore’s Phoenix is seeing flying by leaving the place never to return, just as Dumbledore will never return. The Phoenix is perfectly symbolic as a Phoenix rises from the ashes, a rebirth from death; the hope of something greater is to come. Harry, Ron, and Hermione will carry the plan to discover all the Horcruxes to defeat Voldemort and save Hogwarts for future generations. As Dumbledore once said, “Happiness can be always found, even in the darkest of times if one only remembers to turn on the light”. It’s a motto I have always relied on in my own moments of sorrow and disappointments. There is always a balance of light and dark in our lives and even in times of tragedy one must remember the good that we have and the moments of joy to come. These emotions were perfectly and emotionally embodied in the underlying music.

It was a wonderful evening from chatting with fellow Potter fans to watching the movie, to hearing the beautiful and spellbinding score played by the magnificent Hollywood Bowl Orchestra. After all these years over two decades, does Harry Potter still bring me joy? As Snape once said, “Always”.

For more information on checking out a Harry Potter in Concert near you check out
https://www.harrypotterinconcert.com. 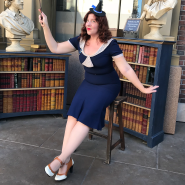 Tove Lo Shines Down On Her Subjects From Atop A Throne