LOS ANGELES, CA- Willie Nelson once famously said, “There are two kinds of men. Those who are in love with Emmylou Harris, and those who haven’t met her.” My father is staunchly in the first category. I recall a text from him one day when I was having a tough time with something.

“I’m in love with another woman,” he wrote, “Her name is Emmylou Harris.” He then sent me a couple of his favorite songs by her saying, “These always make me feel better when I am down.” When I told my mother about the amusing exchange she laughed and said, “Well, I am in love with her too. So I guess she’s always been the third woman in our marriage.”

Being from Kentucky, this exchange is hardly surprising. Like her country music sisters, Dolly Parton and Linda Ronstadt, who she made the album “Trio” with, Harris has a rather deified status in my mind. “Blue Kentucky Girl” is still one of my favorite albums, and songs, of all time. Suffice it to say, I was ecstatic that she was playing at the Disney Hall after having been away for so long as a result of the pandemic.

Stepping out on stage with her band she was as beautiful as ever, with a main of white hair falling down her back. She eased into her nearly 2-hour set starting with “Here I am.” and “Orphan Girl.” “I am standing by the river,” she sang, “I will be standing here forever.”

Her show was a trip through her career, spanning the old with the new, and the upbeat with the calm. It was also a love letter to all of the artists she loves and admires. After a couple of songs where she rocked out to “Two more bottles of wine” and came back down to earth with “Red Dirt Girl,” for which Harris was awarded her tenth Grammy (out of eleven total to date), she paid homage to Nancy Griffith with “Gold Coast Highway.”

While not known primarily as a songwriter, Harris has written a few lovely songs in her life, one such song is “Get up John,” which she joked was her attempt at marrying Hank Williams, Sam Cook, Bill Monroe, and Robert Johnson all at once.

Harris also paid tribute to the perpetual pain of the United States, a situation she referred to as “Black Lives (not) Mattering,” with her rendition of Bob Dylan’s song, “Death of Emmett Till.” The title only served to further press just how far we as a country still had to go as young black boys continue to die on our streets with distressing frequency.

Harris’ exposition of the artists she loved continued throughout the evening as she played songs by Steve Earle, Mary Carpenter, Joan Baez, and more. And Harris’ band was just as much a delight on stage as she was as they varied between instruments and musical styles, even singing acapella at one point. The band came back out for a two-song encore to say a proper goodbye. Emmylou, for her part, was sure to turn to every side of the concert hall and connect with each member of her audience as they waved goodbye excitedly. 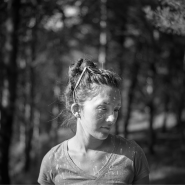 Field Medic’s Music Is An Honest Look Into The Soul Of An Artist THOUGHTS+PHOTOS: FIELD MEDIC @ THE ECHOPLEX 12/2/17