There’s always a vintage vibe at Kings Theatre. The relic of a venue is stashed in Flatbush, a neighborhood not yet entirely ravaged by gentrification, and thus, retains a few remnants of the cross-cultural color and grit associated with the ‘70s, ‘80s, and ‘90s old school Brooklyn. But Kings’ origin hearkens back even further. Built in 1929, it is as gilded and grand as one might expect of construction during such a quintessentially opulent era and renders much of New York’s more modern, minimalistic architecture dreary in comparison.

In a sense, Kings Theatre is the ideal setting for Kamasi Washington, as nostalgia permeates his music and performance style, too, even though it is also tangled with distinct freshness and ferocity.

DJ Natasha Diggs ushered in the audience with Gregory Porter, Stevie Wonder, and Aretha Franklin tunes, along with various other retro-soul, funk, and house mixes. Washington took the stage shortly after, transfixing us all from the moment he played his first note.

Widely considered a political musician, Washington conveyed a message deeply rooted in solidarity, connectedness, and peace when introducing his song, “Truth.” “We will play five different harmonies as a metaphor for how beautiful things will be when we all come together.” As the song began, there existed energy akin to anxiety that isn’t uncommon when building to a crescendo, but it teetered on the edge of disjointedness as the song progressed. However, as promised, the song ultimately resolved in magnificent harmony. In our current climate, the difference is emphasized and wielded as a tool of tyranny. But instead of exacerbating angst and hopelessness, Washington broached the subject by celebrating the irrepressible power and beauty of difference, an approach both radical and refreshing.

Each and every song in his set was an odyssey of Homeric proportions. Washington’s extended improvisations inspired audience members to jump ecstatically to their feet many times throughout the night. But unlike most front men, he shared the spotlight. A utilitarian bandleader who is truly a musician’s musician, he frequently paused his own playing to showcase each member of his band: Vocalist Patrice Quinn, drummer Tony Austin, bassist Ben Williams, drummer Ronald Bruner Jr., trombonist Ryan Porter, keyboardist BIGYUKI, and on soprano saxophone and flute, his own father, Rickey Washington, who he introduced as “…The guy that taught me everything I know.” Washington announced each person before their respective solos, took a step back as he lowered his saxophone, closed his eyes, and swayed – fully immersed in their virtuosity – until they finished, and he shouted their names once more to encourage adulation.

His message of peaceful unity eventually evolved into a proclamation of unified resistance during Washington’s final song of the night, “Fists of Fury,” which abandons any notions of pacifism to combat oppression: “I use hands/To help my fellow man/I use hands/To do just what I can/And when I’m faced with unjust injury/Then I change my hands/To fists of fury…” As Patrice Quinn echoed the refrain, “Our time as victims is over/We will no longer ask for justice/Instead we will take our retribution,” these lyrics, reminiscent of civil rights era calls to action, ignited the crowd, who with both joy and rage in their own voices, shouted affirmations from their seats. The deliberate and moving cacophony created by his eight-piece band during this elongated rendition culminated in a roaring finish. Washington waved goodbye with words of gratitude: “We love coming to New York, y’all always show us so much love and we love you back. You’re absolutely beautiful and we’ll definitely be back. So, until then, peace.” The wistful audience cheered and continued to do so even after the house lights came on, hoping he’d reconsider and play just one more.

What accounts for Washington’s popularity and success in a historical moment where jazz seems particularly sidelined? A time when pop prevails and computers are privileged over instruments in the recording studio? Maybe it’s because he stands for something; he knows the battle against institutional oppression isn’t over, and by fearlessly engaging this fight in his music, it resonates with people. Maybe it’s that he deconstructs then builds anew our often antiquated notions of the jazz genre through his overt nods to contemporary R&B and hip-hop, which he arranges right beside archetypical classical and jazz influences. Or maybe it’s because he’s busted through genre stratification even further, by playing and arranging strings on albums like Kendrick Lemar’s seminal To Pimp a Butterfly, and has collaborated with the likes of Snoop Dogg, John Legend, and Run the Jewels, making his music relevant and palpable to the jazz-ignorant masses. Regardless of how or why his throwback quality is juxtaposed with something entirely yet intangibly new.

We buried the notion of mainstream jazz superstars alongside Miles Davis years ago, but if this Brooklyn audience was any indication, Kamasi Washington has managed to resurrect it. 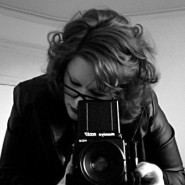 Maeghan Donohue is a writer, editor, and photographer. After obtaining an M.A. from NYU’s Gallatin School of Individualized Study in philosophy, Marxism, and aesthetics, she abandoned the world of academic abstraction, and now spends most of her time either in her Brooklyn studio or on location, shooting fashion editorials, portraiture, and live music. Maeghan is currently the creative director of OUTTAKKE, and in the rare moments she’s not working or traveling, she sings, plays guitar, obsesses about global politics, dances spastically to Iggy Pop, and hangs out with her three cats. Maeghan garners much of her creative inspiration from the work of Susan Sontag, Buddy Guy, Roxane Gay, Trent Reznor, Angela Davis, Patti Smith, James Baldwin, Kiki Smith, Johnny Cash, Andy Warhol, Lightnin’ Hopkins, William S. Burroughs, Eric Williams, Fran Lebowitz, and, being a native Marylander herself, Baltimore’s own “Pope of Trash,” the great John Waters. Follow Maeghan on Instagram: @placetohideplacetohustle.

Rancid’s Set Cut Short But The Bash Still Rocked The Bash Festival Rolls Through Englishtown, New Jersey But Is Curtailed Due To Inclement Weather

Mike Ray gets fresh on new single ‘Juice’ therealagebeats is brought back on production, and Lecs Blvck and IamTerrier guest on vocals

Classixx Warms Up The “Sound In Focus” Crowd With Their Infectious Dance Grooves REVIEW+PHOTOS: Classixx at KCRW/Annenberg's "Sound In Focus" 7/16/16

Noah Cyrus releases her “Lonely” Collection for mental health live at Space 15 Twenty The 19-year-old singer-songwriter released her exclusive cause apparel with the Crystal Campaign and Urban Outfitters to support mental health awareness.